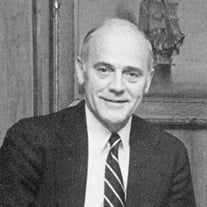 HOLDEN - Russell Edward Johnson, M.D., the son of Nellie Victoria and Elmer Russell Johnson, died February 5, 2021, one day after his 90th birthday, at University Hospital, Worcester, MA. He was born and raised in Worcester and lived in Holden for the bulk of his adult life. He was educated in Worcester schools, at Harvard University, and at the Medical School of the University of Pennsylvania. He completed his medical training as an intern and resident in obstetrics and gynecology at the Hospital of the University of Pennsylvania. Following his residency training, he served for two years in the Army as a captain in the Medical Corps, practicing obstetrics-gynecology at Fort Carson, Colorado. He then returned to Worcester, where he practiced OB-GYN from 1963 until 2010. His medical appointments were at Worcester Hahnemann Hospital, Holden District Hospital, Memorial Hospital, St. Vincent Hospital, and the University of Massachusetts Medical School. He served as President of the staff at Hahnemann Hospital and as chief of OB-GYN at Hahnemann for many years. He was certified by the National Board of Medical Examiners and by the American Board of OB-GYN. Russ was a member of the Massachusetts Medical Society, The Worcester District Medical Society, AMA, the New England OB-GYN Society, and the American College of OB-GYN. In 2012 he was inducted into the Worcester Public High School Hall of Fame for his athletic achievements at Worcester South High School. He was Captain of the 1953 Harvard baseball team and upon graduation signed a contract to play professional baseball with the Washington Senators organization. After one successful season in their minor league system, medical school took precedence and his baseball career ended. In later years his athletic skills were manifested on the golf course, where he took great pride in being Senior Club Champion for two years, at the ages of 80 and 81, at Tatnuck Country Club, where he enjoyed many years of membership. Russ was also gifted with an uncommon musical "ear", and liked nothing better than a late-night sing-along around the piano, especially featuring the songs of the 40's and 50's. His pianistic style was unique. He was a member of W.I.S.E. Family was primary in his priorities. He leaves his wife of 63 years, Betsy, and his sons; Peter Johnson and his wife Carol of Stow, MA, Thomas Johnson of Washington, D.C., William Johnson and his wife Kylie of Amherst, MA; granddaughter Courtney Johnson of Atlanta, GA; grandson Travis Johnson of Shrewsbury, MA; and granddaughter Naomi Johnson of Amherst MA. He will be greatly missed. Contributions in lieu of flowers can be sent to the Worcester Boys and Girls Club, 65 Tainter Street, Worcester, Mass., 01610. or the Shriners Hospital for Children, Processing Center, Box 1510, Ransom, West Virginia, 25438-4510. Funeral arrangements are under the care of the Miles Funeral Home, 1158 Main St., Holden. A memorial service will be held in the spring. To share a memory of to offer an online condolence, please visit the "Tribute Wall" on this page.

HOLDEN - Russell Edward Johnson, M.D., the son of Nellie Victoria and Elmer Russell Johnson, died February 5, 2021, one day after his 90th birthday, at University Hospital, Worcester, MA. He was born and raised in Worcester and lived in Holden... View Obituary & Service Information

The family of Russell Edward Johnson M.D. created this Life Tributes page to make it easy to share your memories.

Send flowers to the Johnson family.