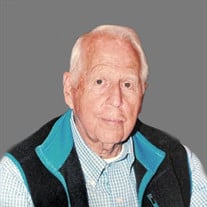 WORCESTER - Russell E. Vickstrom, Sr. aged 100, passed to the larger life on January 30 at Knollwood Skilled Nursing Center. Born in Worcester, Russell was the son of Ernest Rudolph Vickstrom and Laura Mae Daley and lived his entire life in Worcester. He was predeceased by his wife of 58 years, Jean Davidson Vickstrom and two sisters, Harriet Johnson and Bette Coleman. He leaves behind four sons, Russell and his wife, Debra of Holden, James and his wife, Gail of Millbury, Steven and his wife, Andrea and David and his partner, Karen Reardon of Worcester; seven grandchildren, Erik, Andrew, Todd, Kristina, Adam, Tyler and Sara; and five great grandchildren, Levi, Olivia, Lily, Henry and Liam; and his toy Yorkshire Terrier, Daisy. He often had a running joke that he liked animals more than he did most people. Russell, a WWII veteran of the US Coast Guard retired from Norton Company in 1982 after 32 years of service. He and his young family survived the Worcester tornado in 1953 where his house was destroyed. He rebuilt his life in the North end of Worcester. In retirement Russell devoted himself to maintaining his yard meticulously, enjoying time spent at his trailer on the Cape and at his pool in Worcester. He was a member of the Greendale Retired Men’s Club, enjoying many of their trips and was a 70-year member of Greendale Peoples Church where he served as a deacon for many years. The family would like to thank the staff at Knollwood for their superb care and also recognize and thank his youngest son, David for being his constant companion and care giver for many years, certainly a devoted son but also a true best friend. Due to COVID restrictions, internment at Worcester County Memorial Park in Paxton will be private. A celebration of life will be announced and held at a later date. The family requests that flowers be omitted and instead would appreciate memorial contributions to the Endowment Fund at Greendale Peoples Church, 25 Francis Street, Worcester, MA 01606. Arrangements are under the care of Miles Funeral Home, 1158 Main Street, Holden. To share a memory or offer a condolence please visit "The Tribute Wall."

The family of Russell E. Vickstrom, Sr. created this Life Tributes page to make it easy to share your memories.

Send flowers to the Vickstrom family.