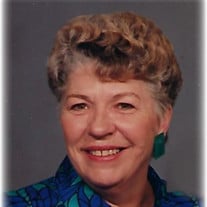 EAST BROOKFIELD – Ruth L. (Surprenant) McNeaney, 89, of East Main Street, passed away on Sunday, February 7, 2021, with her family by her side. She was born in Spencer the daughter of Albert W. and Letitia B. (Doxey) Surprenant. Her husband of 58 years, Richard C. McNeaney died in 2009. She leaves six sons, David R. McNeaney and his wife Lee of West Dennis, Peter J. McNeaney and his wife Anne Reynolds of North Brookfield, John A. McNeaney and his wife Candace of Belchertown, Paul M. McNeaney, James A. McNeaney and his wife Caron, and Timothy S. McNeaney and his wife Jennifer all of East Brookfield; nine grandchildren, Jason, Nicole, Meghan, Brian, Alicia, Alison, Andrew, Matthew, and Ian; her great-grandchildren, Sean, Emily, Gabriella, Rory, Reagan, Tabor, James, Madison, Connor and Sophia; and many nieces and nephews. She was predeceased by her brother, Albert W. Surprenant, Jr., her sister, Eleanor Sandstrom, and a grandson, Patrick Richard McNeaney. Ruth graduated from David Prouty High School in 1949. In 1973 she received her Associate in Science in Nursing from Quinsigamond College; in 1982 she earned her Bachelor of Science in Nursing from Worcester State College. She worked as a Registered Nurse at Quaboag Nursing Home, Harrington Hospital, UMass Medical University Campus, and Monson Development Center. Ruth was the school nurse in North Brookfield for 20 years until her retirement in 1994. Ruth was very active in her community serving as the East Brookfield Town Clerk from 1983 to 1992, and serving on many town boards including the Board of Health, Planning Board, Historical Society, and as a Cemetery Commissioner. She was a member of the Quaboag Historical Socie-ty, the East Brookfield Baptist Church, and the Lashaway Senior Citizens. She was a Justice of the Peace from 1984 till present. Ruth loved to read, dance, study genealogy, and spend time at the family house in North Haven, Maine. As a proud Republican, she enjoyed watching political shows on Fox News and debating (mostly arguing) the issues with her family and friends. The family would like to thank Overlook Hospice and her caregiver, Kelsie Rieder for their professionalism, care, and compassion they gave Ruth. Calling hours will be held on Tuesday, February 9 from 5:00-7:00 p.m. in the Miles Funeral Home, 1158 Main Street (Rte. 122A), Holden. Ruth's funeral will be held on Wednesday, February 10 with a Mass at 11:00 a.m. at St. John the Baptist Church, 121 Blaine Ave, East Brookfield. Burial will follow in Evergreen Cemetery. In lieu of flowers, donations may be made in Ruth's memory to a charity of your choice. To share a memory or to offer an online condolence, please visit the "Tribute Wall" on this page.

EAST BROOKFIELD &#8211; Ruth L. (Surprenant) McNeaney, 89, of East Main Street, passed away on Sunday, February 7, 2021, with her family by her side. She was born in Spencer the daughter of Albert W. and Letitia B. (Doxey) Surprenant. Her husband... View Obituary & Service Information

The family of Ruth L. (Surprenant) McNeaney created this Life Tributes page to make it easy to share your memories.

Send flowers to the McNeaney family.