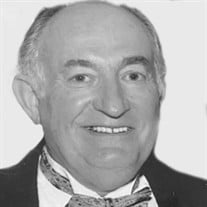 WORCESTER - Samuel I. Gordon, age 85, of Boca Raton, Florida died on Monday, November 9, 2020. His wife of 47 years, Harriet Gordon died in 2006. He leaves a daughter, Susanne Gordon of Providence; two sons, Michael Gordon of New York City and David Gordon of Newton, MA, daughter-in-law, Jenny Gordon, and three grandchildren, Joshua, Jacob and Adam. He was predeceased by his brother, Arthur. President of Goldstein Swank and Gordon Jewelers founded in 1899, Sam took over the family business in 1960 and worked alongside his wife, Harriet until they sold the stores to a regional chain. He graduated from Boston University in 1956 then enlisted in the Army where he was stationed in Germany. A longtime member of Temple Emanuel and the Rotary Club, he was well known in the Worcester community. With a love of sports, he played football at Logan Field, basketball at Newton Square and tennis at Holden Towers. Due to Covid 19, the funeral services will be strictly private at B'Nai Brith Cemetery in Worcester under the direction of Richard Perlman of Miles Funeral Home of Holden. Memorial Contributions may be made to the Jewish Federation of Central Mass, 633 Salisbury Street, Worcester, MA 01609 or to a charity of the donor’s choice.

The family of Samuel I. Gordon created this Life Tributes page to make it easy to share your memories.

Send flowers to the Gordon family.