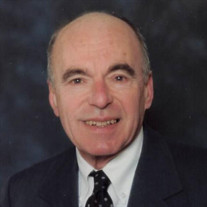 WORCESTER - Samuel M. Laipson, 92, died peacefully at the Willows Healthcare Center in Worcester on March 7, 2022. Born and raised in Worcester, Sam was the son of Oscar and Esther (Harris) Laipson and brother of the late Wynne (Laipson) Chase. He was a graduate of North High School, Clark University, and Boston University Law School and practiced law in Worcester for 65 years, most of them as a principal in the firm of Berg and Laipson. While thoughtful and deliberative by temperament, Sam also had a keen sense of humor and told – and relished – a good joke. He was beloved by small children and animals, including every household pet his family ever adopted. Sam was an adept woodworker, an aficionado of Dixieland jazz and gin martinis, and an avid reader of mysteries. He was also a man of immense integrity and honor, whose word was his bond. Sam is survived by his devoted wife of 63 years, Shirley (Adelson) Laipson; by his daughter Joanne Laipson, of Los Angeles, and her wife Elizabeth Osder; and by his son, Peter Laipson, of Arlington, his wife Alison Lobron, and their son Jonathan Laipson. He also leaves behind his nephew Micah Chase of Worcester; niece April Chase-Lubitz of Providence, RI; and nephew Tzvi Ben-Elyah of Yokneam, Israel, as well as extended family and dear friends, including his former colleague Burton Berg of Worcester. A Funeral Service will be held at 12:00 noon on Thursday, March 10 at Miles Funeral Home, 1158 Main Street, Holden. Out of an abundance of caution, the family requests that all those in attendance wear masks. Interment will follow at B’nai Brith Cemetery, 55 St. John’s Road, Worcester. Immediately following interment services, family and friends will gather for a Memorial Observance Reception in the Great Room at The Willows of Worcester, 101 Barry Road. Memorial Observance will continue as the family observes Shiva on Friday, March 11, from 1:00 to 4:00 pm at his residence. The family is deeply grateful to the Willows Healthcare staff for their care of Sam over the last several months. In lieu of flowers, donations may be made to the American Diabetes Association at https://www.diabetes.org/ or to another charity of the donor’s choice.

WORCESTER - Samuel M. Laipson, 92, died peacefully at the Willows Healthcare Center in Worcester on March 7, 2022. Born and raised in Worcester, Sam was the son of Oscar and Esther (Harris) Laipson and brother of the late Wynne (Laipson) Chase.... View Obituary & Service Information

The family of Samuel M. Laipson created this Life Tributes page to make it easy to share your memories.

Send flowers to the Laipson family.