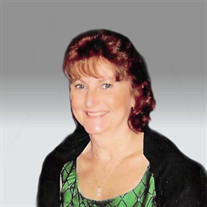 WEST BOYLSTON - Sandra (Christian) Flynn, 72, died peacefully at home on Monday, August 23, 2021, after a battle with leukemia, which she fought hard against up until the end. She was born in Worcester, the daughter of Ralph F. and M. Beverly (Carrier) Christian. She will be lovingly missed and remembered by her family, son Joshua Savage, his wife Kelly, and their children Zachary and Eric Baumann of Johns Creek, GA; daughter Julie Bembenek of Putnam, CT and her children, Jethro Spiece and Tyler Bembenek; and son Christopher Flynn, his wife Tiffany, and their children, Hailey and Ashlea Flynn of Hutchinson, KS. Sandra was predeceased by her husband of 27 years, John J. Flynn, Jr. in 2019. Sandra was a graduate of Wachusett Regional High School and briefly attended Worcester Junior College. Many years later, she graduated Magna Cum Laude from Quinsigamond Community College, earning an Associate's Degree in Liberal Arts. At Q.C.C. she was a member of Phi Theta Kappa Honor Society. Sandra then went on to earn a Bachelor's of Science in Health Sciences, graduating with High Honors, from Worcester State University. While at Worcester State she was a member of Eta Sigma Gamma, an Honor Society in Health Education. Later in life Sandra's love of animals lead her to attend Bancroft School of Massage - Dog Gone U, where she earned a Certification in Small Animal Massage. She established her own business, Pawsatively Tender Touch, to bring comfort and relief to needy animals. Sandra worked at Christ Lutheran Nursery School in West Boylston for several years in the early 1980s, first as a Teacher's Aide and later as a Teacher. Moving into the medical field, she worked at Fallon Clinic for 19 years as a Medical Assistant and at UMass Memorial Healthcare for 27 years as a Cardiac Technician in the Non-Invasive Cardiology Department. She was a Certified Clinical Medical Assistant with the National Healthcare Association. Sandra was a Certified CPR and First Aid Instructor and led many classes over the years at St. Vincent Hospital, among other local venues. In recent years, Sandra spent time working and volunteering at the Senior Center in West Boylston, where she made many good friends and had many good times. Sandra was a past member of Chaffin's Congregational Church in Holden, MA, where she taught Sunday School and served on the Board of Education. Later in life, she became a member of the First Congregational Church in West Boylston where she leaves many dear friends. Above all, she cherished spending time with her family, traveling and taking adventures with her son Josh, and being surrounded by her beloved pets. She will be greatly missed by dogs Seamus and Lukas and cats Callie and Daisy. Sandra enjoyed traveling and especially looked forward to trips to the beaches at Martha's Vineyard and Cape Cod, and later became a fan of Sanibel Island in Florida. She loved gardening, antiquing, furniture refinishing, and watching HGTV. She became skilled at making stained glass, crafting ornaments and pieces as gifts for her many friends and family members. On weekends in the fall, she could be found adorned in her lucky team clothing, watching and rooting for the Patriots. Relatives and friends are invited to attend calling hours from 6 to 8 p.m. on Monday, August 30, 2021, at Miles Funeral Home, 1158 Main St., Holden. A funeral service will be held at 10 a.m. on Tuesday, August 31st at The First Congregational Church of West Boylston, 26 Central St., West Boylston. Burial will follow at Worcester County Memorial Park, 216 Richard's Ave., Paxton. In lieu of flowers, donations may be made in her memory to Worcester Animal Rescue League, 139 Holden St., Worcester, MA 01606 or to Shriner's Hospitals for Children, Processing Center, PO Box 863765 Orlando, FL 32886. To share a memory or offer an online condolence visit "The Tribute Wall."

WEST BOYLSTON - Sandra (Christian) Flynn, 72, died peacefully at home on Monday, August 23, 2021, after a battle with leukemia, which she fought hard against up until the end. She was born in Worcester, the daughter of Ralph F. and M. Beverly... View Obituary & Service Information

The family of Sandra (Christian) Flynn created this Life Tributes page to make it easy to share your memories.

Send flowers to the Flynn family.