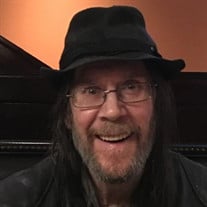 Worcester/Holden - Scott H. Macomber, 67, died peacefully on Saturday, September 5, 2020 at the Hermitage Healthcare Center, Worcester. He was born in Worcester and lived in Holden, Worcester and the Washington, D.C., area. Scott graduated from Wachusett Regional High School with the class of 1970 and went on to study Criminal Justice at the University of Maryland. As a young man he pursued a career at the FBI, starting as a file clerk in Washington, D.C., and was interested in becoming an agent. He chose to leave the FBI and worked for the Xerox Corporation for many years before returning to the Worcester area. Scott had a passion for music that he carried throughout his life. As a young man he taught himself to play the piano, and he was very talented. Scott loved classic rock and had a thorough knowledge of the genre, from the early Beatles through the progressive rock styles of Rush and everything in between. Scott used music to connect with people, whether he was playing the piano for his friends and family or chatting with the clerk at Jelly's Records in Worcester, where he loved to shop. He was an avid Celtics fan, enjoying especially the glory days of the Larry Bird era. He also enjoyed the sport of tennis, both as a player and fan. He will be deeply missed by all who knew him. Scott was predeceased by his parents, James and Florence (Hurlbrink) Henderson. He will be lovingly missed and remembered by his siblings, James Henderson and his wife, Bonnie, of Manchester, CT; Edward Henderson and his wife, Diane, of Trinity, NC; Alison Henderson Graham and her husband, Thomas, of Webster; Stacey Wynn and her husband, Jackson, of Merrimack, NH; Matthew Henderson and his wife, Carolyn, of Marlborough, CT; and Mark Henderson and his wife, Jini, of Holden; his son, Jeremy S. Macomber and his wife, Kaila, of PA; as well as many nieces and nephews. The family wishes to thank the network of community health professionals of Worcester for their efforts which afforded Scott a life of independence and dignity throughout his years as a Worcester resident. A graveside service honoring and celebrating Scott's life will be held at 11 a.m. on Friday, September 11, 2020 at Grove Cemetery, Main St., Holden. In lieu of flowers donations may be made to Community Healthlink, Inc., 72 Jaques Avenue, Worcester, MA 01610. Arrangements are under the care of Miles Funeral Home, 1158 Main St., Holden. To share a memory or offer a condolence visit www.milesfuneralhome.com

The family of Scott H. Macomber created this Life Tributes page to make it easy to share your memories.

Send flowers to the Macomber family.