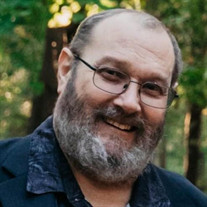 EAST TEMPLETON - Scott D. Young of East Templeton passed away on Sunday, December 5th, 2021. Scott, affectionately known by those closest to him as “Buddha,” was quick with a smile, a joke, and a laugh so contagious it could turn around even the hardest of days. Scott was truly unforgettable to all those who met him, knew him, and loved him very much. Scott was born in Gardner on April 24th, 1963. He attended Narragansett High School in the class of 1981, and worked many years for IPG Photonics. Prior to working for IPG, Scott worked for the Smithsonian on the SMA Radio telescopes in Hawaii that were dedicated and put into service on November 22nd, 2003. Scott was an avid member of the Rabbit Club of Gardner, where he served alongside many generations and members of his family, and formed most of his closest friendships. Scott also loved his family without equal. Scott is survived by his wife of nearly 15 years, Joyce Young, whom he loved more than anything. He is also survived by his daughter, Kathleen A. Young, and son, Dustin S. Young who were his absolute pride and joy. Scott is survived by his mother, Dianne M. Young, his loving sister, Lynn M. Young and her significant other, Daniel Straus of Winchendon, but is predeceased by his father, Douglas R. Young, and his sister, Cheryl A. Young. Scott also had many other family members that he loved and cared about deeply. His step-son, Matthew R. Ball and his wife, Allison R. Ball, and his daughter-in-law, Jenna M. Young. Scott also had many aunts, uncles, nieces, nephews, and great nieces and nephews that meant a great deal to him. Finally, Scott had a beloved dog, Tess, who is still waiting faithfully by the door for him to come home. A Celebration of his Life will be planned for the spring of 2022. In honor of Scott’s life, and in true Scott fashion, we ask you to raise a glass and cheers to an amazing husband, father, son, brother, step-father, father-in-law, uncle, and friend, who will be missed beyond belief. Arrangements are under the care of Miles Funeral Home of Holden. To share a memory or offer an online condolence, please visit the "Tribute Wall" on this page.

EAST TEMPLETON - Scott D. Young of East Templeton passed away on Sunday, December 5th, 2021. Scott, affectionately known by those closest to him as &#8220;Buddha,&#8221; was quick with a smile, a joke, and a laugh so contagious it could turn... View Obituary & Service Information

The family of Scott D. Young created this Life Tributes page to make it easy to share your memories.

Send flowers to the Young family.