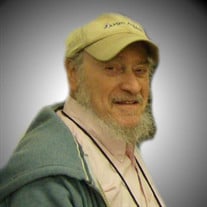 Stanley's funeral service will be livestreamed on Monday, December 28th, at 12pm at this link: https://client.tribucast.com/tcid/14630164 WORCESTER - Stanley Shapiro, 87, passed away on December 14th after a long and courageous battle with MDS. He was born in Worcester, MA, son of Abraham and Dorothy Shapiro, where he lived his entire life. Stanley graduated from Commerce High in Worcester and Franklin Tech in Boston with a degree in photography. He began his career as a photographer and then went on to work as an editor of a newspaper project for Readex/NewsBank for 43+ years. Through his work, he traveled to libraries, colleges, museums, and historical societies throughout New England and New York from where he would borrow rare and valuable newspapers which would then be microfilmed. The project goal was to film and preserve all newspapers which were printed in the United States between the 1600s and 1820. He was greatly respected by the organizations who entrusted these valuable documents to him and regarded him one of the most knowledgeable people of early American newspapers. Stanley was a generous gentleman with a kind and compassionate heart, a Mensch. He was a lifelong learner with an amazing dry wit, and there are just not enough kind words to describe him by those who knew and loved him. In his free time, he enjoyed photography, drawing and painting, and collecting and reading books that sparked his interest. Stanley loved nature, wildlife, and his dog, Brewster. He published miniature books through his company Oakham Bindery and took a particular interest in paper marbling. He leaves behind his devoted and loving wife, “Betsy” Judith Shapiro, son Alek Shapiro, both of Worcester, stepdaughter Karen Strachovsky (John) of Summerfield, FL, and stepdaughter Dale Shaw (Larry) of Palmer, MA. He also leaves behind his sisters, Leona Ricklin (Donald) and Beatrice Shapiro Cohen, both of Worcester, as well as many nieces, nephews, great nieces, and great nephews, all of whom he loved and cherished to the end. Funeral services will be held at 12:00PM on Monday, December 28th at Miles Funeral Home, 1158 Main Street, Holden under the direction of Richard Perlman. Burial will be in Rural Cemetery. Masks and social distancing are required. For information on live streaming please visit Stanley’s obituary on the funeral home’s website: www.milesfuneralhome.com Memorial contribution may be made in his name to the ASPCA, P.O. Box 96929, Washington DC, 20077-7127 or to the American Antiquarian Society, 185 Salisbury Street, Worcester, 01609 where he maintained an office during his long career with Readex. To share a memory or offer a condolence please visit "The Tribute Wall."

Stanley's funeral service will be livestreamed on Monday, December 28th, at 12pm at this link: https://client.tribucast.com/tcid/14630164 WORCESTER - Stanley Shapiro, 87, passed away on December 14th after a long and courageous battle with... View Obituary & Service Information

The family of Stanley Shapiro created this Life Tributes page to make it easy to share your memories.

Stanley&#39;s funeral service will be livestreamed on Monday, December...

Send flowers to the Shapiro family.