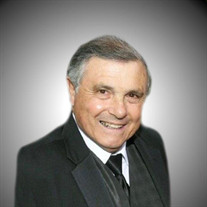 WORCESTER - Stephen J. Celona, 82, passed away peacefully in the comfort of his home on Thursday, July 1, 2021. Born in Ware and raised in South Barre and Clinton, Stephen was the son of the late Stephen J. and Rose G. (Santangelo) Celona and lived the last 50 years in Worcester. His beloved wife of 53 years, Patricia "Patsy" A. (Ryan) Celona died May 31, 2018. He will be lovingly remembered and missed by his daughter, Laurie A. O'Leary and her husband, Michael of Millbury; two sons, Stephen F. Celona and his wife, Nina of Mountainside, NJ, and David M. Celona and his wife, Karen of Holden; a sister, Mary Lydon of West Lebanon, NH; two brothers, Paul Celona of Shirley and Michael Celona of Mount Holly Springs, PA; and his grandchildren, Gina Goodrich, Christina, John and Joseph Celona. Steve was a graduate of Clinton High School, class of 1956, where he was a three sport athlete. Steve excelled in baseball and was the Boston Globe's "All Star Outfielder" of 1956. He was scouted by the Boston Red Sox and played semi-pro and legion baseball. After graduating from Worcester Junior College in 1958 with a degree in business administration, Steve enlisted in the United States Air Force and honorably served his country from 1960 to 1966. While serving in the Air Force Reserves, he went to work for Millbrook Distributors in Leicester retiring after 30 plus years as their vice president of sales. Steve treasured every moment spent with family. He looked forward to spending summers with Patsy in York Beach, Maine and at their timeshare in St. Martin with family and close friends. He especially loved his role as a grandfather and cherished time spent fishing with Joe and watching him play baseball, attending Christina’s dance recitals and John’s lacrosse games. He had a remarkable relationship with his granddaughter, Gina. They were best friends and enjoyed daily chats, weekly lunches and trips to Fenway. Steve was an avid sports fan and outdoorsman and enjoyed hunting and fishing, especially with his son Steve and brother Paul. He was a member of both the Shirley Rod and Gun Club and the Eight Point Sportsmen's Club in Sterling. Steve was a high school basketball and football referee and coached baseball at Joe Schwartz Little League in Worcester. He was a faithful member of St. George Church in Worcester. Relatives and friends are invited to visit with Steve's family from 5 to 8pm on Wednesday, July 7, at the Miles Funeral Home, 1158 Main St., Holden. A Mass of Christian Burial will be celebrated at 10 am on Thursday, July 8, at St. George Church, 38 Brattle St., Worcester. Steve will be laid to rest beside his beloved Patsy at St. John's Cemetery in Lancaster. To share a memory or offer a condolence, please visit "The Tribute Wall."

WORCESTER - Stephen J. Celona, 82, passed away peacefully in the comfort of his home on Thursday, July 1, 2021. Born in Ware and raised in South Barre and Clinton, Stephen was the son of the late Stephen J. and Rose G. (Santangelo) Celona and... View Obituary & Service Information

The family of Stephen J. Celona created this Life Tributes page to make it easy to share your memories.

Send flowers to the Celona family.