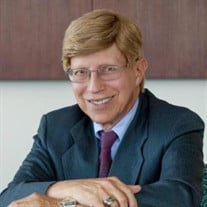 Stuart's Funeral Service may be viewed by clicking the following link: http://client.tribucast.com/tcid/5961716123 WORCESTER - Stuart Allen Hammer, 77, of Worcester, passed away on September 13, 2021 after a long battle with illness. Stuart was born in Passaic, New Jersey, to David and Sarah Hammer on October 21, 1943. After graduating from Cornell University in 1965, Stuart received his Juris Doctor from Fordham University in 1968 and a Master of Laws Degree in Taxation from New York University in 1970. He then served three years as an Attorney-Advisor to the late Honorable John Kern and the late Honorable Theodore Tannenwald, Jr., both judges on the United States Tax Court. He worked most recently as a partner in the law firm of Christopher, Hays, Wojcik, & Mavricos, LLP, for over 10 years. He was a Life Member of the American Begonia Society and past president of the Boston chapter, served on the national board of the Gesneriad Society, was past president of Jewish Family Service of Worcester, served on the board of the Holden Towers Worcester Tennis Club, and was on the founding board of the Abaarso School. He lived and worked in the Worcester area for over 45 years. Stuart is survived by his long time partner, Susan Starr, son Jeffrey Hammer and his wife Anne Hammer, daughter Kimberly Hammer, brother Harvey Hammer, sister Phyllis Hammer, and grandchildren Henry Hammer, Sarah Hammer, and Jacob Perez. Funeral services will be held at 1:00pm, Friday, September 17, 2021, at Miles Funeral Home, 1158 Main Street, Holden, MA. Preceding the funeral service, calling hours will be from 12:00pm to 1:00pm at the funeral home. There will be a memorial reception following the service; details to be announced at the time of funeral, as well as shiva information. The family welcomes donations to Rachel’s Table (http://www.rachelstable.org/) as an expression of sympathy instead of flowers. The family of Stuart wishes to extend our sincere thanks to Dr. Daniel Roberts at Dana-Farber/Brigham and Women's Cancer Center at Milford Regional, UMass Memorial Medical Center, Deborah Fins for sourcing home and in-patient care, and The Jewish Healthcare Center for their rehabilitative and hospice services. To share a memory or offer a condolence please visit: "The Tribute Wall."

Stuart's Funeral Service may be viewed by clicking the following link: http://client.tribucast.com/tcid/5961716123 WORCESTER - Stuart Allen Hammer, 77, of Worcester, passed away on September 13, 2021 after a long battle with illness. Stuart... View Obituary & Service Information

The family of Stuart Allen Hammer created this Life Tributes page to make it easy to share your memories.

Stuart&#39;s Funeral Service may be viewed by clicking the following...

Send flowers to the Hammer family.