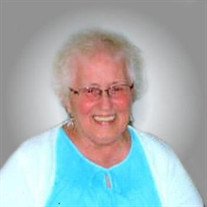 WORCESTER/HOLDEN – Therese “Terry” R. (Boucher) Black, 91, passed away on December 24, 2020 at the Christopher House in Worcester after a long illness. She leaves her husband of 44 years, Robert J. Black of Holden. Terry was born in Worcester, the daughter of the late William and Marie (Lesley) Boucher. She attended St. Joseph Grammar School in Worcester and the former Annhurst College in South Woodstock, CT. She spent 22 years as a sister in the religious order, the Daughters of the Holy Spirit, where she was known as Sister Albert Frances. After leaving the order, Terry worked at several local banks as a loan officer. She then went on to work as the Meal Site Manager for several years at the Holden Senior Center. After her retirement, she continued to volunteer at the Holden Senior Center where she was honored for her dedicated service. Terry is survived by a step-daughter, Joanne Peck and her husband, Brian of Rapid City, SD; a step-son, Steven Black and his wife, Pat of Westport, IN; several step-grandchildren, a step great-grandchild, and many nieces and nephews. Besides her parents, she is predeceased by her brothers Antoine, Armand, Cyrus, Frances and her sister, Bernadette Bilodeau. Terry loved music. She played the piano, organ, guitar and sang in the choir at St. Joseph Church in Worcester. She also enjoyed playing cards, bingo and traveling. Due to Covid-19 restrictions, services will be held at a later date. In lieu of flowers, donations in Terry’s memory may be made to St. John’s Food for the Poor Program, 44 Temple St., Worcester, MA 01604. Miles Funeral Home of Holden is assisting with arrangements.

The family of Therese "Terry" R. (Boucher) Black created this Life Tributes page to make it easy to share your memories.

Send flowers to the Black family.