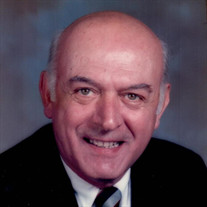 HOLDEN—Thomas P. Malitas, age 96, passed away peacefully at home on Saturday, May 28, 2022. Born in Albania, he was the son of Philip and Virginia (Diamandis) Malita. In 1934, Tom and his family immigrated to the United States, settling in Worcester. He graduated from the former Classical High School in Worcester in 1945. A few years later in 1947, he married the love of his life, Evelyn R. (White) Malitas. They began their family in Worcester and moved to Holden where they would live for almost 50 years. Tom worked as a Manufacturing Engineering Technician for over 30 years at Norton Company in Worcester. At the same time, he owned and operated P & T Pizza on Lincoln St. in Worcester with his brother, before owning Holiday Pizza on Pleasant St. for over 10 years. He and his wife enjoyed traveling, visiting many countries in Europe and further explored the western part of the United States. He enjoyed classical music, the opera, and would make trips in his lifetime to New York City to see live performances. An active member of St. Spyridon Greek Orthodox Cathedral in Worcester, Tom was a former president of the Ahepa and worked tirelessly on the Scholarship Committee for many years. He was a member of the Greendale Men’s Club and the Worcester Art Museum. In his most recent years, Tom was known as The Mayor in his neighborhood. Everyone loved him. In the morning, he would light his cigar and take a walk around the neighborhood, pick up his newspaper, and say hello to his neighbors and friends. His day would be complete with a beer in hand at 5PM. He will be lovingly missed by his two daughters, Dianne M. Guntharp and her husband, Geoffrey of Webster; Gail M. Malitas and her husband, William A. Robbins of Keene, NH, his grandchildren Kelsey Guntharp, Bree Beauregard (Mark), and Noah Guntharp, Jason Robbins (Jennifer), and Adam Robbins (Alyssa Larson); nieces, Marlene Shepard (Paul), Marcia Gusha (Jimmy), Sally Keenan (Tim), and Sophia Christakis; nephews Paul White (Richard Barisano), Philip Malitas and David White; as well as many grandnieces and grandnephews. Besides his parents, Tom is predeceased by his wife, Evelyn R. (White) Malitas, who passed in 2018; his son, Gregory T. Malitas; and his brother, Peter Malita. Relatives and friends are invited to visit with Tom’s family from 4:00 PM to 6:00 PM on Thursday, June 2nd, at the Miles Funeral Home, 1158 Main St., Holden. A funeral service will take place at 11:00 AM on Friday, June 3rd, at St. Spyridon Greek Orthodox Cathedral, 102 Russell St., Worcester. In lieu of flowers, memorial donations may be made to St. Spyridon Greek Orthodox Cathedral in Worcester, MA. To share a memory or offer a condolence, please his tribute wall. May His Memory Be Eternal.

HOLDEN&#8212;Thomas P. Malitas, age 96, passed away peacefully at home on Saturday, May 28, 2022. Born in Albania, he was the son of Philip and Virginia (Diamandis) Malita. In 1934, Tom and his family immigrated to the United States, settling... View Obituary & Service Information

The family of Thomas P. Malitas created this Life Tributes page to make it easy to share your memories.