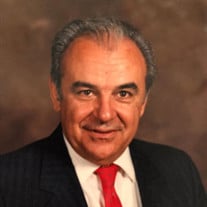 HOLDEN – Vincent P. Pusateri, 87, passed away peacefully with his loving wife, Sylvia, at his side on Saturday, November 28, 2020. Born and raised in Worcester, Vincent was the son of Joseph R. Pusateri and Margaret S. Pusateri. Vincent graduated from North High School in Worcester. He was the first member of his family to attend college, graduating from Clark University having completed his Bachelor’s Degree in only 3 years. He married Sylvia L. Adams in 1965 and moved with her to Holden where they have lived together for the past 55 years. After graduating from Clark, Vincent held positions managing Independent Lock and Foster Grant manufacturing facilities in Fitchburg and Leominster respectively. While working in this capacity Vincent served as a juror in the Worcester Superior Court and was inspired to become an attorney. He graduated Suffolk University Law School in 1968 and became a member of the Massachusetts bar on May 12, 1969. He opened a general practice as a solo practitioner in Fitchburg which continues to operate today. Over the course of his career he developed a reputation amongst his peers as a highly skilled trial attorney. Along with Sylvia, he was a longstanding member of Our Lady of Mount Carmel and Our Lady of Loreto Parish where he served on the parish counsel. He also served the Diocese of Worcester over the years on the Bishops Fund, now known as Partners in Charity. Despite his many accomplishments, his true legacy is his uncompromising love and dedication to his family which has and will continue to enrich their lives. He is survived by his beloved bride of 55 years, Sylvia L. Pusateri, his children Gina M. Wilson, Joseph R. Pusateri and his wife Julie Pusateri, and Vincent P. Pusateri, II and his wife Cheryl L. Pusateri, and three grandchildren, Michael J. Wilson, Erica L. Locke, and Vincent P. Pusateri, III. He was predeceased by his great-grandson Lucas Leroy Locke. Relatives and friends are invited to visit with Vincent’s family from 5 to 7 pm on Thursday, December 3, at Miles Funeral Home, 1158 Main St., Holden. A funeral Mass will be celebrated at 11 am on Friday, December 4, at Our Lady of Mount Carmel and Our Lady of Loreto Parish located at 37 Massasoit Road, Worcester. In lieu of flowers, donations in his name may be made to the Legacy of Hope Campaign, c/o the Diocese of Worcester, 49 Elm Street, Worcester Massachusetts 01609-2567. Funeral arrangements are under the care of Miles Funeral Home, Greater Worcester Funeral Care.

HOLDEN &#8211; Vincent P. Pusateri, 87, passed away peacefully with his loving wife, Sylvia, at his side on Saturday, November 28, 2020. Born and raised in Worcester, Vincent was the son of Joseph R. Pusateri and Margaret S. Pusateri. Vincent... View Obituary & Service Information

The family of Vincent P. Pusateri, Sr. created this Life Tributes page to make it easy to share your memories.