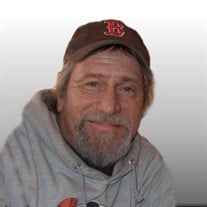 Walter P. Toll, 62, died on November 26, 2021, at Pacific Care Center in Pacific, MO. from complications of a stroke that he suffered in December 2018. Walter Paul Toll was born in Ogden, UT on December 11,1958. He was the son of William & Ann (Shirley) Toll of Framingham, MA. In addition to both of his parents, Walter leaves behind his sister and brother-in-law Katherine (Toll) & Peter Plucinski, his niece and nephew Shirley & Benjamin Plucinski, along with many cousins and other extended family members. Wally, as he was known by family & friends, grew up in Framingham, MA. and attended Framingham North HS, graduating in 1976. He also attended Umass Amherst and in 1980, joined the US Army and was stationed near the East/West German border. In 1983, Wally moved to Santa Barbara, CA. where he lived with his first wife, Judith (Smith, Toll) Cutino for more than a decade. In 1999, Wally moved to Ft. Lauderdale, FL. where he met & married his second wife, Abigail Tannen. In 2004, he moved back to Massachusetts just in time to witness the Boston Red Sox FINALLY win the World Series which occurred during a multi planetary alignment and lunar eclipse!!! Wally was a devoted Boston sports fanatic & this was one of his most treasured memories!!! Wally traveled all throughout the United States. He visited and lived in many, many places. Along the way he always made new friends & acquaintances by charming them easily with his quick wit and good humor. If there was a fun time to be had, Wally was always the first one in line! In 2008, Wally moved to the St. Louis, MO. area where he lived until suffering a severe stroke just days before his 60th birthday in 2018. Over his lifetime, Wally worked as a Salesman, Paralegal and House Painter. Wally loved sports, music, traveling, and spending time laughing with friends & family. Although Wally had no children, he was a much loved Canine Dad over the years to Max, Zappa, Bogart, Priscilla, Yaz, & Buffy. The family will be holding memorial services & a burial in the Spring, still to be determined, in Massachusetts & New Hampshire. In lieu of flowers, please donate to any Animal Rescue or Addiction Support charity of your choice.

Walter P. Toll, 62, died on November 26, 2021, at Pacific Care Center in Pacific, MO. from complications of a stroke that he suffered in December 2018. Walter Paul Toll was born in Ogden, UT on December 11,1958. He was the son of William & Ann... View Obituary & Service Information

The family of Walter P. Toll created this Life Tributes page to make it easy to share your memories.

Send flowers to the Toll family.