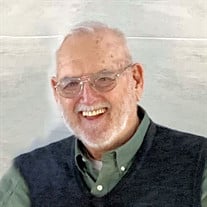 Sterling - Lt. Col. William W Bird, of Sterling MA, passed away on Friday, August 13, 2021, at his home, surrounded by his family. He leaves behind his cherished and beloved wife, Maxine; his "adopted" son, Rob Beard and his wife Alecia, of Russellville, AL; his loving sister, Beverly Miller of Hoschton, GA; his daughter in law, Elisha (Lish) Epstein Bird; his stepchildren, Robert Foley and Mary Foley of Leominster, and Paul Foley of Orange City, FL. He also leaves behind his four adoring grandchildren, Sibylla Bird, Ciara Hebert, Cayden Ago and Jaxon Foley. Col. Bird was predeceased by his first wife, Anne Morrison Bird of Helena, MT; his son, William Bird of Germany; and his parents, William and Margaret Bird of VA. He was born in Harrisonburg, VA. He and his family lived in many different parts of the United States, as part of his military duties. His 14 yrs of overseas service included assignments in Germany, Scotland, Italy and Vietnam. His military decorations include five Bronze Star Medals, two Air Medals, two Meritorious Service Medals, two Army Commendation Medals, plus numerous unit, campaign and service medals. Col. Bird was a 1960 graduate of Virginia Polytechnic Institute and had advanced degrees from the U.S. Army Command & General Staff College, Troy State University and Ball State University. Upon leaving the service, he was employed for 21 years by Raytheon Company, in various Radar & Missile System Support Programs. He retired from the company as the Missile Defense Systems Support Manager. Col. Bird served for many years as a member and chair of the Sterling Conservation Commission and the Sterling Zoning Board of Appeals. He was a member of Holy Family of Nazareth Church (Leominster) and Our Lady of Mercy Church (Worcester), American Legion Post 189, 18th Field Artillery Association, Disabled American Veterans, Military Officers Association of America, The Military Order of World Wars and The Rockingham Union Lodge of Masons. The family would like to express their profound gratitude to all the medical and laypeople, especially the Sterling Rescue Squad and Drs. Abhijeet Patel, Justin Jordan and Brian Nahed, who assisted Bill in this journey. Relatives and friends are invited to gather with the family from 5 to 8 p.m. on Thursday, August 19 in the Miles-Sterling Funeral Home and Tribute Center, 100 Worcester Road, Sterling. A Mass of Christian Burial will be celebrated on Friday, August 20 at 11 a.m. at Holy Family of Nazareth Church, 750 Union Street, Leominster. Col. Bird will be laid to rest at Arlington National Cemetery at the convenience of the family. In lieu of flowers, Bill requested that donations be made to the Sterling Animal Shelter at 17 Laurelwood Rd, Sterling, MA 01564. To share a memory or a condolence, please visit the "Tribute Wall" on this page.

Sterling - Lt. Col. William W Bird, of Sterling MA, passed away on Friday, August 13, 2021, at his home, surrounded by his family. He leaves behind his cherished and beloved wife, Maxine; his "adopted" son, Rob Beard and his wife Alecia, of... View Obituary & Service Information

The family of William W. Bird, Jr. created this Life Tributes page to make it easy to share your memories.

Send flowers to the Bird family.