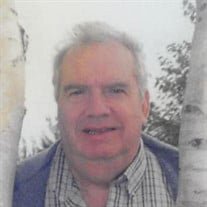 RUTLAND – William “Dick” R. Quinn, 80, beloved husband of Anne L. (Hebert) Quinn, passed away peacefully on Tuesday, August 25, 2020 at Oakdale Rehabilitation & Skilled Nursing Center in West Boylston. Born and raised in Marlborough, he was a son of the late William and Rita (Capen) Smith. Dick attended Marlborough schools prior to enlisting in the United States Air Force. Upon his return from military duty, he met and married Anne and together they raised their family in Bolton. Dick began his sales career with Diamond Shoe Company. He went on to work for several area shoe companies and earned his retirement in 2000 after 30 years in the business. Dick was known to his family and friends as a gourmet cook. He could always be found in the kitchen preparing meals for the family and gathering together for Sunday dinners created many happy memories. In his younger years he started a chess club for Lancaster students and they went on to play in several tournaments. Dick and Anne loved to travel and they spent 15 years returning to their favorite destination, Prince Edward Island. Above all else, he was a dedicated family man and a faithful member of St. Patrick’s Church in Rutland. He will be lovingly missed and remembered by his wife of 53 years, Anne; his daughter, Christine Leonard and her husband, Scott of Rutland; his two sons, Patrick Quinn and his wife, Patricia of Rutland and Peter Quinn and his wife, Karen of Clinton; and his ten grandchildren. In addition to his parents, he was predeceased by his brother, Robert Quinn and his sister, Betty Quinn. Relatives and friends are invited to visit with the family from 2 to 4 p.m. on Sunday, August 30 in the Miles Funeral Home, 1158 Main Street, Holden. Appropriate Covid-19 protocol will be observed including the use of face masks and social distancing. A Mass of Christian Burial will be celebrated at 10 a.m. on Monday, August 31 in St. Patrick’s Church, 258 Main Street, Rutland. Burial will follow where he will be laid to rest in St. John’s Cemetery, Parker Road, Lancaster. Arrangements are under the care of Miles Funeral Home, 1158 Main Street, Holden. To share a memory or offer a condolence please visit "The Tribute Wall."

The family of William "Dick" R. Quinn created this Life Tributes page to make it easy to share your memories.

Send flowers to the Quinn family.